Learn the difference between Rich SMS, OTT channels and RCS

The ultimate guide: the difference between rich SMS, OTT channels and RCS

Few people send messages today without including rich content such as emojis, images, videos and links. Rich messages can be sent in three ways; via rich SMS, Over-The-Top channels (OTT channels) or Rich Communication Service (RCS). The different channels have their advantages and disadvantages, and the channel that best fits into your company's communication strategy may not necessarily fit as well for others, depending on the purpose of the message. Therefore, choose your message channels carefully.

The development of SMS has progressed rapidly since the end of the twentieth century. The Global System for Mobile Communications Association (GSMA) developed rich SMS and RCS in 2007. The idea was that rich SMS, which in practice is a supplement with rich features in Short Message Service (SMS), would be implemented in the market directly, while RCS would replace rich SMS in the longer term. So what distinguishes the channels and why was rich SMS intended as a precursor to RCS? Rich SMS is a simpler version of RCS where the sender can send short messages with unique URL links to recipients. RCS technology offers messaging with advanced features and a richer design that provides an application experience directly on the mobile. For example, a message can be formatted according to the brand's guidelines with colour, font, and logo. Another smart feature is that messages can be sent from verified senders to avoid doubt about which company it was who sent the message.

Be creative with rich SMS

Today, Rich SMS is the channel that has the highest readability and is used most frequently by marketers. It is in the link that the rich content is found. With rich SMS messages, it is important to be creative with the short text (160 characters, including emojis) you have available to make readers click on the link. The link leads the recipient to a personalised landing page that can contain rich content in the form of interactive images, videos, CTA buttons and more.

RCS will soon be available everywhere

The development of smart mobile phones has been rapid, and SMS, which was invented over 30 years ago, has not kept pace with the need for richer mobile messaging features. Rich SMS was therefore developed as an emergency solution for users to be able to send simpler rich messages in the short term. On the other hand, RCS has been developed to meet the requirements and expectations of today's and future smart mobile phones.

RCS was intended to replace rich SMS a few years ago, but it is only now that the technology has become available on the market to a greater extent. To date, RCS is available with full coverage in the United States, France, India, the United Kingdom, and Brazil, among others. The technology is expected to soon be available in more countries, including Sweden. There are several reasons why it has taken so long for RCS to be implemented in the market; one of them is that there is no universal RCS platform yet. RCS is currently only available for Android devices. This is because Apple has not been able to agree with Google on a common path for the development of RCS.

While Google has been a driving force in the development of RCS technology, Apple has focused on developing Apple Messages for Business. The difference? Currently, RCS only works on Android, and Apple Messages for Business only works on IOS. If you send a rich message from an iPhone to an Android, the "blue" iMessage message will be converted to a "green" SMS. Videos and images are compressed and sent in low resolution between iPhone and Android. RCS messages sent to recipients without the support of RCS are converted to regular SMS. Since Apple has a higher usage rate than Android in the Nordics, Google has had difficulty reaching this market with RCS. Although these problems persist, development is progressing rapidly. The use of RCS increased by 150% in 2021 compared to 2020.

What are the similarities? Both RCS and rich SMS are so-called standard apps. This means that the channels are built into the mobile phone and are thus available to all mobile users without any requirements for download, login or payment (apart from cost per sent message). However, this is not the case with the OTT channels; for these channels users need to make an active choice to download a messaging app to their mobile. The OTT channels need to be connected to wifi or internet to be able to send messages. Rich SMS and RCS also need wifi or an internet connection to be able to send rich messages. However, when internet is unavailable, messages are converted to a traditional SMS instead and are still sent to the recipient. If an OTT channel is not connected to internet, the message is not sent at all.

So which are the OTT channels? There is a wide range of OTT channels and new ones are constantly being developed. Usage and market dominance varies from country to country, but some of the most popular OTT channels are:

Communicate with your target audience in the right channels

Most OTT channels can send images, videos, GIFs, links, and messages from verified senders but not yet branded corporate messages. The OTT channels are available for all mobile phones, but the use of the channels may differ in different countries. WhatsApp dominates in most countries around the world, but in the Nordics, Facebook Messenger has the most users, while in South Korea, only KakaoTalk is used as a messaging channel. Therefore you need to communicate through the channel your target audience uses the most. We guide you to the right choice of channel – contact us!

Rich SMS, RCS and OTT channels differ in their offer. See the table below to compare the channels' different offers and which channel(s) best fits your company's communication strategy. 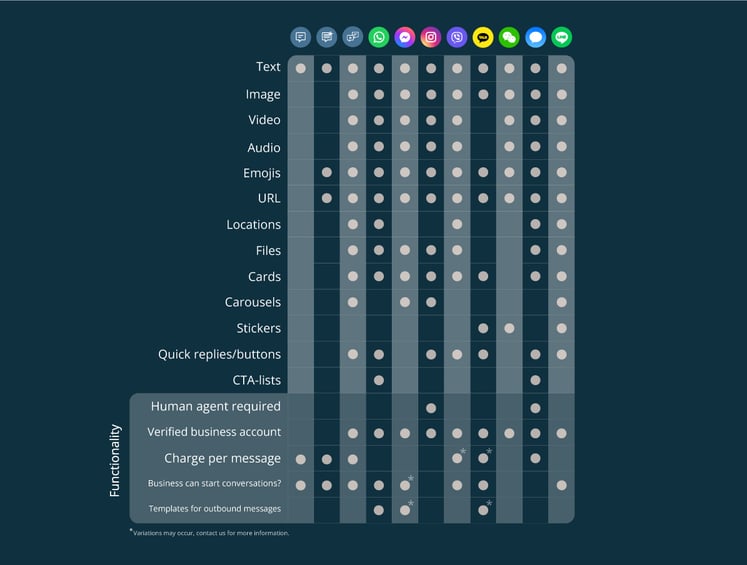 LEKAB provides mobile messaging services, messaging APIs and software for advanced messaging and process automation. We offer digital tools and solutions to companies that want to optimise how they communicate and interact with customers and employees on the mobile to improve productivity, availability and the customer experience through mobile channels. Do you want to know more or ask us for advice? Contact Us!

Customer engagement – how to engage your customers with mobile messaging

How SMS-marketing can drive sales and strengthen customer relationships